When I meet a pupil for the first time I will always investigate what their mental understanding is about hitting the golf ball. In the three previous steps I have covered this in some detail. However, in order for me to explain conception with total clarity I'd like to draw comparisons between good swing technique and bad.

When you go to the driving range or play a round of golf I'm sure you've noticed many weird and wonderful golf swings out there. I'm sure you have looked in amazement at some of those swings and can't believe they are hitting the ball as well as they do. But they must be doing something right, or maybe they have
discovered some kind of secret that you are not aware of.

Lets take a look at some of the swings on the Professional Tour. But before I do, I want to make it absolutely clear that I am in no way trying to disrespect these people and that I have the utmost respect for them as fellow professionals and for what they have achieved in their Professional career. So who are they? You've seen them yourself on television, the likes of, Jim Furyk, Justin Leonard, Lee Trevino, Corey Pavin and Eamon Darcy to name a few. They all have swings which are considered to be unorthodox. Well, I personally envy these guys, they've got trophies, they've got money and they've been immensely successful in the world of golf.

This picture shows Jim Furyk in his accustomed steep and upright position near the completion of his backswing. Most would try and change his swing if he had a sudden loss of form, but I wouldn't, I would simply get him focusing on impact and forget everything else. 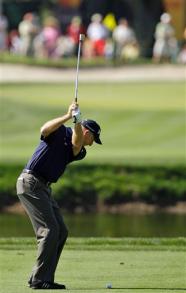 I know the top Pro's have a great mentality and a great short game etc. So why is it then that other good Pro's and amateurs who have so called orthodox swings, are not making the grade and achieving what they desire? The answer, in my opinion, lies with too much blame being directed at their swing technique. It's so easy
to blame our poor old swing every time and it often becomes a habit.

If we now look at a good amateur golfer who has got a great looking swing and a handicap of 12. His swing is looking good, he is taking lessons and he is trying to perfect all of the pieces in his swing. In fact he's working his socks off, but he still doesn't hit the ball as well as his playing partners do, but he knows his swing is technically far better than theirs. But he can't complain about their swings when they are beating him on a regular basis. This can be a very frustrating situation and confusion will inevitably set in.  All he needs to be shown, is conception. He's got the swing he now needs to add impact, this is the only ingredient missing from the formula.

When we analyse the swings of some of the Pro's I mentioned earlier, there is a lot of talk about how they move back to the ball and how their legs initiate the downswing. I agree one hundred percent that we all need a great leg action to help bring the club back to the ball. However, is this leg action a separate
conscious movement or are the legs merely responding to the commands of conception? I personally believe the legs are supporting and facilitating the person's
intention to hit down and through the ball. If we reverse it so we end up with a golfer who has little or no leg action to his finish, we can then establish that the legs were not required to do anything, because he was trying to get under the ball in order to help it up. So in effect the legs will be forced to stay out of the movement to allow the golfer to perform what he has asked himself to perform.

Look at Corey Pavin's impact position. Does it really matter what went on before impact or indeed what is going to happen after impact? No not at all. He has got the club back to impact beautifully, so what if his swing isn't the best in the world. 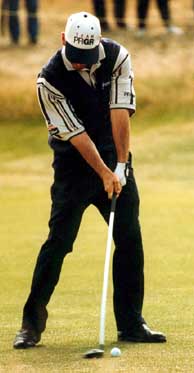 Remember as far as your golf swing is concerned, beauty is in the eyes of the beholder. Or maybe it's in the trophy cabinet. Whichever way you look at it, it's all about results, it's all about- conception.

Here's a question for you.

If a golfer is swinging in a strange and unorthodox manner but is still managing to hit the ball well every time, what is happening?

A, It's just a fluke that it happens every time?

B, He can't do it every time and he needs to alter his swing before the wheels fall off?

C, He's concentrating on getting to the correct impact position regardless of his swing technique?

D, He is managing to get under the ball consistently?