The downswing consists of two distinct elements. The first element is to understand the action and movement of the feet, legs and hips. To learn this you must first understand how the lower half functions. In very simple terms you should turn your lower half to the face your target so that when you have completed your swing your belt buckle is pointing where you want the ball to finish. This is achieved by your lower half action shifting ninety five percent of your weight across to your left leg. 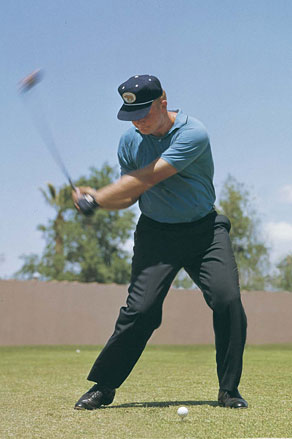 Jack Nicklaus showing a strong leg action
Should I turn or slide? The correct answer is both. You need both lateral movement and rotation simultaneously. The legs provide the lateral move and the hips provide the rotational move. Although, the overwhelming feeling should be one of the hips turning to their finishing position with dominance and power. When you have completed your swing at least ninety five percent of your weight should be on your left leg with your hips facing the target. Your head should always stay behind your lower half movement and remain centred throughout the entire process. Obviously, you need to practice this movement to encourage good muscle memory.

Whether your hitting a ball or simply making a practice swing I want you to try and finish in the correct position every time. keep practicing your finish until you have obtained the proper movement no matter where the ball goes. Ingrain this into your swing so your finishing position becomes part of your natural movement. You can even practice your finishing position in the garden at home. Do everything you can to obtain the movement. Once you have achieved it you will then have a consistent ending to your swing.

The main picture shows a young Jack Nicklaus half way into his downswing. Jack was always renowned for his lower half movement and he repeatedly said how
important it was to his success.

In phase one I spoke about the need for you to learn the lower half action and repeat it every time. Phase two of the downswing is all about when you decide to deploy phase one. In other words, once you have learned to finish your swing with the correct lower half movement, you must then learn the time when you engage it.

At the completion of your backswing your legs and hips will have been pulled into position by the dominance of the shoulder turn. This creates the coil required in order for your legs to lead everything back to the ball. Once you have reached this position at the top of your backswing you should feel the urge to change direction and swing back to the ball. Your legs and hips must start the downswing. All good players deploy their lower half movement at the start of their downswing, their feet, legs and hips initiate the downswing creating a powerful pull on all the other parts of their body. This drive of the lower half pulls the shoulders and torso, which in turn pulls the arms, which in turn pulls the hands, which in turn pulls the club. The club is therefore the last thing to come back to the ball providing maximum clubhead speed through impact.

This picture shows how Ben Hogan is turning his lower body, this produces a powerful pulling action on the upper half. You can clearly see the clubhead lagging back and starting to boil with power. He is definitely leading the club back to the ball, which is essential. 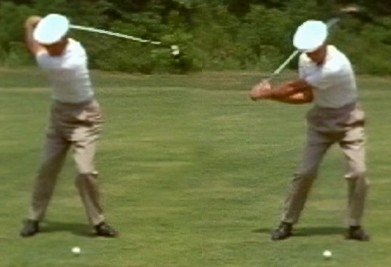 Let me explain the leg action in a very different way. Lets assume for a moment that you've been lucky enough to acquire or win Tiger Wood's leg action. Well, that would be something, we would all pay a lot of money for that. Anyway, you now possess the best lower half movement in the game. Your really excited and can't wait to get to the course to test it and show it off to all your friends. However, at the end of your round you have found that your ball striking was exactly the same as before, in fact there was no improvement whatsoever. Your friends and colleagues did comment on how good your finish looked, but this would be little consolation for you because your overall game was the same as before.

So we need to investigate why there is no improvement. Lets say you came along for a one to one lesson with myself and I asked you to hit a few shots so I could look at your swing. Based on this example I would probably say something like, "wow, what a great looking finish, it looks very similar to Tiger's" you would probably ask why your shots are so poor given the fact that you apparently have this great lower half action.

The answer would be simple, you are deploying this fantastic leg action after you have struck the ball. You are starting your downswing with your hands and arms (probably trying to lift the ball up) and then adding Tiger's leg action on afterwards. So it doesn't matter how good your leg action is, if you deploy it as an after thought it will contribute absolutely zero to the shot.

In plain English you must first learn the correct lower half action, then you must learn to engage this action at the start of your downswing. If your leg action is perfect, but you deploy it half a second, after your hands and arms have initiated the downswing, then you will never hit the ball properly.

Remember this is the fourth step in a process, so if you haven't got the first three steps right you've little or no chance with this one. To be honest, if you have got steps one through to three correct, you will find this step far, far easier.


Okay lets see if you grasped that.

What is the main role of the feet, legs and hips in the downswing?

A, They must move through after I have hit the ball?

B, They are there to make me look good?

C, They keep the weight back so I can get under the ball?

D They initiate the downswing movement all the way through to my finishing position?